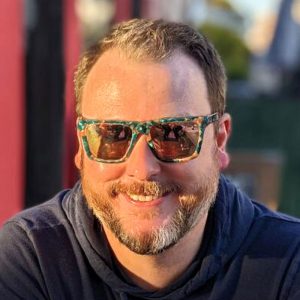 Your major: Video and Radio Production

Where do you live now? SLC

What are you passionate about? Survival horror video games, female pop, and working in live TV.

What is your favorite class (or classes) at SLCC? Radio, naturally! Runners up are 2600 Production for Student Media and 2250 TV Studio Production

Which actor/actress would play you in your life movie? A young Paul Newman

Where do you see yourself in five years? Graduated and missing SLCC. Also more salt than pepper.

If you could have a superpower, what would it be? Teleportation, like Nightcrawler from X-Men. Instant vacation travel funded by surprise trips to bank vaults.

Something about you that other people would be surprised to know: I was in a hip-hop band when I lived in Seattle.

Favorite food: dozens of hot wings and no witnesses