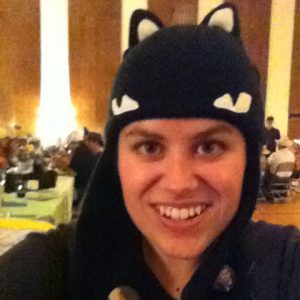 Where do you live now? Stansbury Park, UT

What are you passionate about? I love trying to keep up with what’s going on in current events, politics (in good measure), etc., locally, nationally, as well as what’s happening in the rest of the world.

What is your favorite class (or classes) at SLCC? For this semester, it would probably be either this class (COMM 1560), or my English 2010 class. If it’s my favorite of all the classes I’ve ever taken, I would have to say Ballroom Dancing.

Which actor/actress would play you in your life movie? I think Jennifer Lawrence would be a good choice. She seems to be a naturally happy and outgoing person, and yet she’s performed incredibly well as characters suffering mentally, in my opinion. And since I’ve struggled with mental illness in my life, I believe she would do justice to both the bad and the good.

Where do you see yourself in five years? In five years, I see myself with a Bachelor’s Degree. Preferably in Journalism and Creative Writing. If I’m lucky, I may even be a published author. Hopefully I didn’t just jinx that…

If you could have a superpower, what would it be? I would want to be completely literate in all languages on the planet. I want to do a lot of travelling, plus I think communication is the best way to better understand different people and their cultures.

Something about you that other people would be surprised to know: When I was younger I wanted to go into animation. I still love animated films and TV shows all the way from Disney to Anime and yes, I even watch My Little Pony: Friendship is Magic.

Favorite musicians and/or artists: Oh goodness, I love so many types of music it’s somewhere between awesome and ridiculous. I???ve always loved classical music. I also love a good orchestrated soundtrack, and believe it can often make or break a film. A couple of my favorite film composers would have to be Hans Zimmer and Michael Giacchino. Howard Shore’s score for The Lord of the Rings was amazing, and John Williams??? work is legendary. Besides film scores, I have a ton of music from varying genres and languages.

Favorite sports or sports teams: I love to watch soccer, so I would definitely say that my team is Real Salt Lake. It’s probably the only time I really chose just one team to root for. I usually just start watching whatever sport is on and pick a team to cheer for.

What’s your favorite place to eat? The Cheesecake Factory, easily. I love to order their Culotte Steak which comes with a garlic steak-butter, so no other sauce is needed. If I’m getting cheesecake, I tend to go for either the Vanilla Bean or the Tuxedo, both of which are fantastic!

What was your favorite cereal as a kid? Cinnamon Toast Crunch or Cocoa Pebbles, and they’re still my favorites to this day.