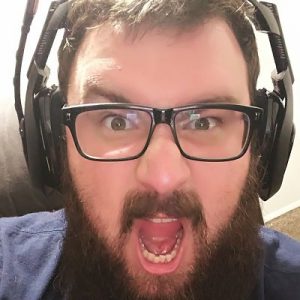 Where do you live now? Magna, Utah

What are you passionate about? I’m passionate about all things VIDEO GAMES! They’ve been a huge part of my life since I was 4 years old, and is easily my favorite form of art. There’s no other form of media entertainment that can engage with you quite like a video game can, and I’m always wanting to celebrate that fact. Some people like to take quotes from movies or songs, and use them to inspire them… and well, my favorite quotes all come from characters in video games! I love to talk about video games too, and I have my own weekly podcast! The channel is called Revelry Gaming on YouTube, and should be linked below ;) I also love to write in all sorts of different genres. I enjoy writing news pieces, creative non-fiction, short stories, long-form essays… I was also published in SLCC’s Fall 2016 Art & Literary Magazine “Peregrenations,” for a non-fiction piece I wrote on opioid addiction.

What is your favorite class (or classes) at SLCC? I have a few favorite classes I’ve taken, or am currently taking right now at SLCC. These include COMM-1130: Media Writing, ENGL-2280: Creative Nonfiction Writing, COMM-2250: TV Production, and COMM-1560: Radio Production!

Which actor/actress would play you in your life movie? If there was ever to be a movie about my life, I think Liev Schreiber (dude who plays Sabertooth in some of the X-Men movies) would have to play to role of your’s truly. For one, I’ve been told numerous times that I resemble him, and he was SABERTOOTH! Wolverine’s arch-enemy? Why WOULDN’T I want this guy to portray me on screen?

Where do you see yourself in five years? In five years, I see myself working in some sort of writing or production position. I LOVE to write, but I’m also feeling an incredible amount of excitement after being introduced to TV and radio production this Fall semester! I consider myself sort of a tech-head, so learning about production and audio equipment has been fascinating. Who knows! Maybe I’ll get to write about some of my favorite subjects, like video games & industry news, or perhaps I’ll be on a production team for a local news station!

If you could have a superpower, what would it be? If I could have a superpower, I think I’d take Spider-Man’s abilities. He’s my favorite super hero, I’ve been reading the comics since I was a teenager, and he has some pretty cool powers. Slinging around the city, super-strength, a spidey-sense so no one could sneak up on me, and I could climb walls & ceilings. Although, I don’t think Utah would be the best place to web-sling around… there aren’t enough tall buildings like New York City :(

Something about you that other people would be surprised to know: In 2013, I was in a car accident that broke two of my vertebrae, L4 and L5, and fractured the illiac crest of my right hip bone. I nearly died, went through 2 major spinal surgeries in 6 weeks, and I couldn’t work for an entire year. This accident ultimately led me to pursue my college career at SLCC, and to discover a lot of personal interests for myself. It helped me realize that life is COMPLETELY unpredictable and chaotic, and that we only have a short time on Earth to do what we love. It might sound cliche, but I really think there’s something that changed in me after that accident. Gave me an awesome new perspective. It was a scary time in my life, but also resulted in many positive learning and growing experiences.

Favorite musicians and/or artists: I have WAY too many favorite bands & artists to even list. As a general rule, I love anything associated with METAL. Heavy metal, death metal, progressive metal, classic metal, black metal… you get the idea. Lately, I’ve been listening to a lot of music from a band called The Contortionist, a prog-metal band that makes “concept” albums often revolving around existentialism, space exploration, and hyper-communication ideas (yeah… like aliens and stuff). I have HUNDREDS of other bands that I’ve spent a huge amount of time listening to and admiring. Naming any more specific bands would be a never-ending list.

Favorite TV shows and/or movies: My favorite TV show of all time is The Office. The writers of that show are just… brilliant. The one-liners for some of the characters are so devoid of normal human intelligence, that it turns out to be genius. I’ve watched every episode of The Office so many times, I could quite literally recite the lines word-for-word while watching.

Favorite food: My favorite food is anything Italian! My mother is a full-blooded Italian woman, and I grew up eating every pasta you could imagine with any sauce you could imagine. My grandmother (or Nana) also made the best Italian food you’d ever taste. She came from Sicily, so I was lucky enough to taste REAL Italian food all my life, not the crap they have at The Olive Garden ;)